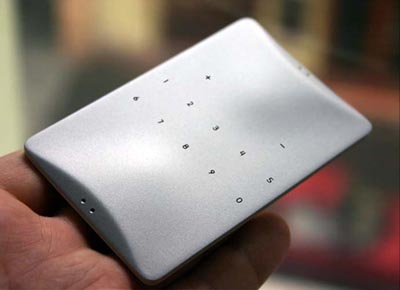 Mobile phones are getting more advanced by the day and manufacturers are trying to shove as much functionality as they can into the tiniest of packages. Lost in the mix are folks that just want a simple handset that does nothing more than make voice calls. There is push toward simplicity and it doesn’t get much more basic than the Freedom Phone concept designed by Vadim Kibardin.

The primary application for this handset would be for travelers who do not want to (or cannot) bring their regular cell phone with them on the road. Say that you’ve got the Verizon Voyager and you’re heading over to Tokyo for a couple of weeks; it just wouldn’t be a good idea to pay for all that roaming and that’s assuming that your phone works at all!

The Freedom Phone is supposed to make things a lot easier for international users, because there’s no SIM card to install and no roaming charges to worry about. Instead, the handset serves as a basic prepaid cell phone, getting loaded with a certain number of minutes. Important information is listed on the back and you’ve got fundamental controls on the front.

I don’t know. I’d want at least a display myself.