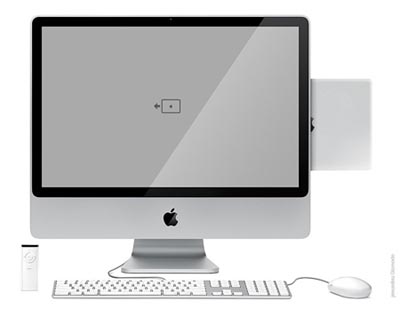 Apple never ceases to amaze me, even when they’re not the ones reporting the news. The latest US patent filed by Apple appears to call for a docking station on the side of the iMac. This dock isn’t for an iPod, though, it’s for a MacBook laptop computer.

I know. It sounds pretty outrageous to dock a full-blown computer into another full-blown computer, but bear with me as we try to figure this one out. As you may have heard, there are rumors floating around about an ultraportable MacBook that will be unveiled at MacWorld in San Francisco. This smaller notebook could then integrate with your home computer (iMac), effectively combining everything that the two units have to offer.

Another possible scenario is that the ultraportable MacBook doesn’t actually dock into an iMac, but rather docks into an “iMac-like device”, effectively giving a desktop-like experience to the ultracompact notebook. In this way, it could work “similarly to the old PowerBook Duo and its DuoDock base station, but vertically instead of horizontally.”