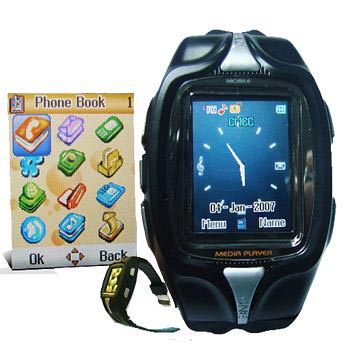 Don’t you hate it when you don’t have a pocket for your cell phone? You won’t have that problem with the Turtle Wireless TWP-800, because it’s a tri-band GSM mobile phone that doubles as a wristwatch. It’s a little chunkier than a Timex, but the TWP-800 also does a lot more than just tell time.

As mentioned, it’s got a tri-band GSM radio inside for doing all the usual things that a mobile phone does. Because of the severe lack of buttons, the primary interface is done through the touchscreen display. Yes, a touchscreen! To push it even further, this wrist-worn device also boasts MP3/MP4 playback, stereo Bluetooth (you don’t want to hold your wrist up to your ear, do you?), WAP, and GPRS for data.

We hear that Turtle Wireless will have the TWP-800 on display at CES and then they’ll officially launch the phone watch in the Latin American market on January 13th. The reasonable $199.95 price tag won’t shock shells either.