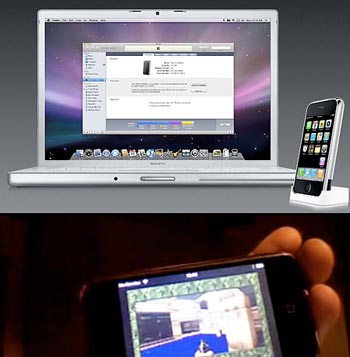 Ah, the Apple iPhone. Steve Jobs initially didn’t want anyone developing third-party applications for his touchtastic mobile, but that didn’t stop the Cupertino enthusiasts and fanboys from creating a wide range of modifications and programs for the iPhone. While some are more useful than others, perhaps the most interesting creations are related to video games.

We’ve seen the NES emulator and the PSX emulator, but the granddaddy of emulation comes when someone manages to bring Doom to a supposedly locked handheld. And that has happened with the iPhone. Some developer who calls himself “Psycho” is working on a build of the classic first person shooter for the iPhone, but it’s “not quite playable yet.”

He’s managed to get the speed up to a decent level and he’s got it “working in widescreen mode.” The control scheme is “interesting”, but it’s “not quite as intuitive as you might hope.” Baby steps to portable fragging. Baby steps.