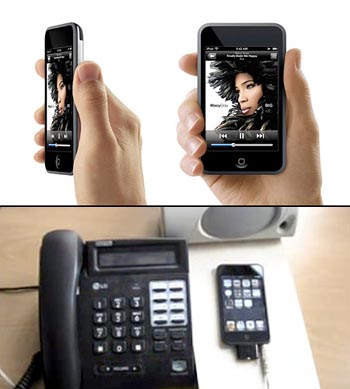 Realistically, the only thing separating the iPod touch from the Apple iPhone is the simple fact that the latter can make phone calls and the former cannot. That little hurdle has apparently been overcome, because touchmods has come up with the VoIP application for the iPod touch and they’re nice enough to provide us with a video demonstration.

In order to complete a VoIP call on the iPod touch, you’ll need to gab the microphone attachment which dangles from the bottom of the portable media player. In the video, you can see that making a call is just as easy as you’d expect it to be. This is definitely a quantum leap forward in functionality for the WiFi-equipped handheld. I’d imagine that transferring the app over to the iPhone should be a reasonably straightforward affair as well.

The team at touchmods plans on releasing the VoIP app tomorrow, so stay tuned for that announcement. We just wonder if firmware 1.1.3 will add another speedbump in their plans.