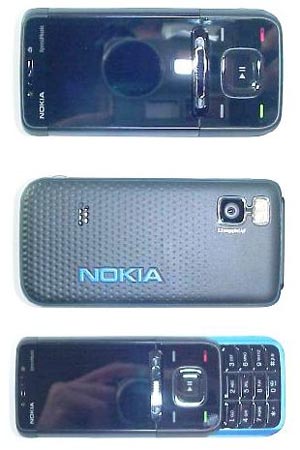 Say what you will about the suits at the FCC, but they seem to be quite the hard-working bunch, even sifting their way through approval applications on New Year’s Eve. The latest handset to arrive at the FCC offices is the Nokia 5610 XpressMusic. The glossy slider phone looks a lot like the Nokia N81, but with the lack of the N-series moniker, I’d imagine that it’s probably cheaper (and not quite as smartphone-ish).

The Nokia 5610 XpressMusic is obviously a musicphone, so it’ll easily handle everything from Bette Midler to Britney Spears. Outside of its melodic inclinations, this handset also gets a 3.0 megapixel camera, web 2.0 services, aluminum side panels, and a textured back so you don’t accidentally drop the thing.

This phone could be a good replacement for your standalone music player, because it boasts a music playback battery life of up to 22 hours. That’s almost a whole day with Soulja Boy! No word on price, but now that FCC approval has been achieved, it’s only a matter of time before an American launch, right?