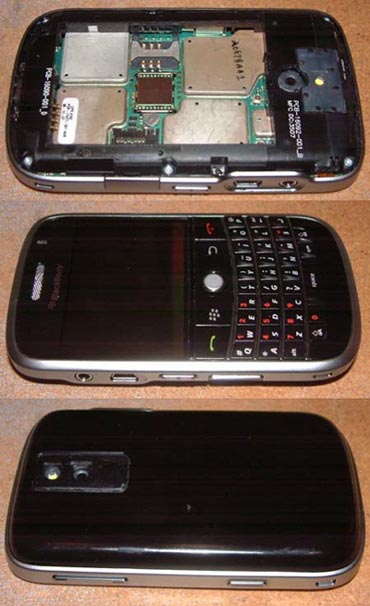 We’ve been following the rumors for a little while now, so it’s very difficult to say what’s for real and what’s not. Naturally, you’ll need to take these spy pictures with a serious grain of salt, but we have reason to believe that this is the hotly anticipated BlackBerry 9000.

Contrary to earlier reports that it’d have a full touchscreen display and an on-screen virtual QWERTY keyboard, this device appears to be rocking a fairly standard “hard” QWERTY keyboard and a landscape-oriented display. It also has that Pearl-tastic navigational nub in the middle. We can’t say for sure, but based on the form factor, we somehow doubt that this version of the BlackBerry 9000 — if it’s legit — has a touchscreen.

Other notable observations include the fact that the silver bezel wrapping around the outside is made of aluminum and we also notice a microSD expansion card slot, providing extra space for documents, music, and the like.