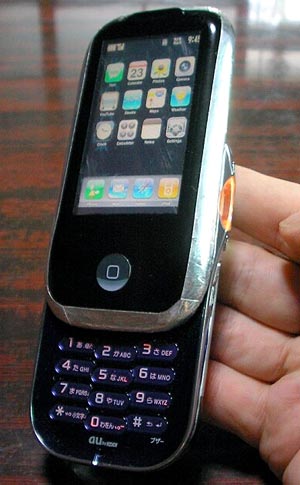 Part of the appeal of the Apple iPhone can be attributed to its utter simplicity. There are virtually no moving parts, so you don’t have to worry about a hinge breaking or a flap suddenly falling off. That said, the slider form factor is quickly gaining in popularity, so you’ve got to wonder if Apple has a sliding iPhone up their sleeve. Wonder no longer, because here it is.

Obviously, this is far from being an official Cupertino release. Instead, an Apple enthusiast has decided to modify his Sony Ericsson W52S Walkman slider phone (from au by KDDI) to resemble the iPhone in every way possible. You see everything from the iPhone-like user interface to the concave button on the face. Heck, he’s even slammed on some metallic trim for good measure.

But the best part is when you flip it over to its back and discover what looks like an Apple logo made out of aluminum foil. Classy, ol’ chap. Classy.