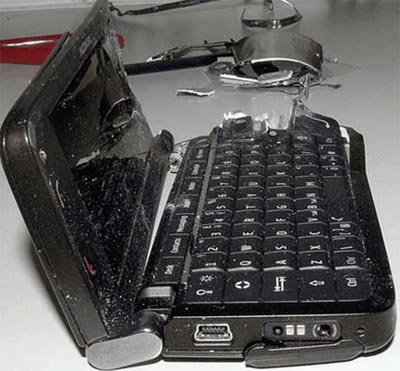 I can’t really begin to imagine why someone would even be interested in buying something like this, because most of the most valuable internals would have already been fried beyond recognition. I guess you could try to salvage the left side of the keyboard and maybe the camera, but that seems like more work than it’s worth.

Whatever the case, some doofus has decided to take a shotgun to his Nokia E90 Communicator, blasting the high-powered smartphone beyond recognition with a mighty “woohoo” of a shot. The right side is completely obliterated, so don’t expect much of the guts to be intact. The display is definitely a no-go. They say that the miniSD card reader still works.

Let’s see. The current street price for a Nokia E90 is about $900. How much is a non-functional, partially destroyed unit worth? According to the now-ended eBay auction, it’s worth $20.50. There were 12 bidders in all.