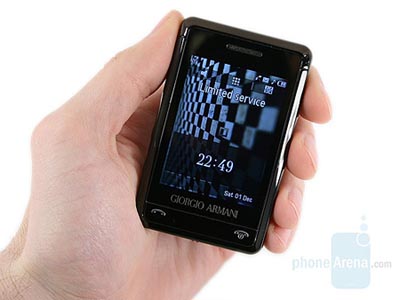 It’s easy enough to say that these phones are attacking the same chunk of the market as the Apple iPhone, but when you consider products like the LG Prada and the Samsung Armani, the Korean variants have definitely taken a more upscale approach by partnering with high-end fashion companies. Not to say that the functionality is equally upscale.

The Samsung Giorgio Armani phone has a form factor and size that is very similar to the LG Prada. Experience the Croix-inspired user interface second hand through the video below, discovering the camera is mediocre at best and the music player — while sounding great — isn’t the easiest to use. In fact, you’ll find that the software is very similar to mid-range Samsung phones like the U600 and U700. The brushed aluminum back, however, is a little more prestigious.

So, what’s the final verdict on the Samsung Armani phone? You’ll have to watch the vid from PhoneArena to find out.