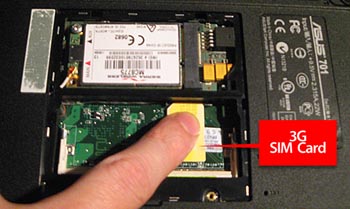 The little laptop that could never ceases to amaze me. We didn’t have particularly high hopes for the Asus Eee PC when it was first announced, because the specs sounded pretty anemic and we weren’t sure if the public would be interested in an el cheapo seven-inch notebook. Based on sales numbers thus far, I guess they are and the machine is just getting better.

JKK Mobile was previously responsible for shoving a touchscreen onto the Asus Eee PC and now they’ve managed to integrate 3G wireless connectivity into the beast as well. It’ll take a little elbow grease and a reasonable level of know-how, but JKK is saying that the mod to install an internal 3G HSDPA card into the Asus Eee PC “is doable by any amateur with a solder iron.”

The signal is said to be quite “super” and the mod costs a mere $291 to complete, not including the time that you’ll put it to perform the enhancement. After adding a touchscreen and 3G, the JKK-customized Asus Eee PC comes to a total of $850. Not exactly cheap anymore, but that’s the price you pay for innovation.

This hack will work with every currently shipping Asus Eee PC model. The only exception is the original batch of 7A models wherein you “would have to desolder the PCIe connector away to make enough room for the 3G module [or] cut 20 millimeters from the modded PCB.”

Full instructions and details can be found at JKK Mobile.