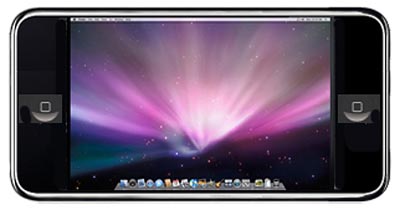 The original line of Apple Newton personal digital assistants didn’t really catch on in the marketplace, but now that Apple has become the hottest thing since sliced bread, people are saying that they have a huge opportunity to re-capture that segment of the market. Rumors are swirling around that Apple may revive the Newton in the form of a stretched iPhone, getting it to rock a larger display, Mac OS X, and an extra button where the earpiece would be.

The mockup that you see here should seriously be digested with a huge pack of salt, but it would very much be in line with current Apple design cues. The new Apple Newton UMC would be held horizontally and there would be one concave button on each side of the screen. Like the iPhone, no physical keyboard would be implemented, relying instead on a virtual QWERTY keyboard displayed on the 5.2-inch 800×480 touchscreen display (courtesy of Balda, the same people who manufacture the screen for the iPhone).

While wishful thinking would lead us to believe that Apple will announce their Newton plans at MacWorld next month, I find that highly unlikely. But that’s not to say that a new Newton might not be in the works. It’d prove to be an excellent competitor for the Nokia Internet Tablets, for example.