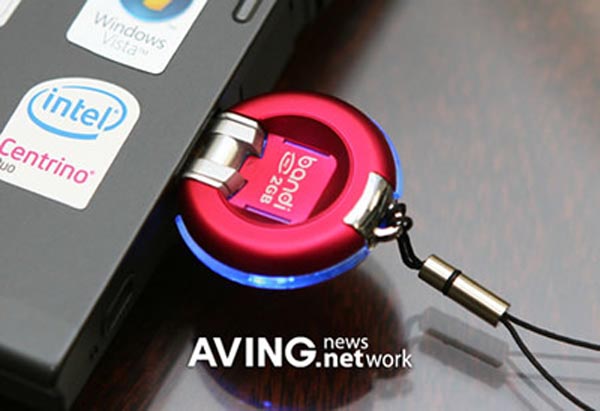 There’s a reason why most USB flash drives are occasionally called thumb drives. The traditional form factor is usually a stick with a USB connector sticking out the end. Zyrus Korea wants to do things a little differently with the Bandi USB Drive, because not only is it round, it also has a flip-out USB connector.

We’ve seen tons of drives with slide-out connectors, but this is one of the very few that I’ve seen with the USB connector flipping out like this. When not in use, the Zyrus Bandi looks almost like a pendant or locket. When you flip out the USB connector, you get USB 2.0 access to the memory found within, sending the data to your computer at 18MB/sec (read) and 4.5MB/sec (write).

There also appears to be a blue-lit ring wrapping around this thing, making the Bandi drive even more attractive. No word on pricing or availability, but we think this Zyrus Korea product is — appropriately enough — a Korea-only release.