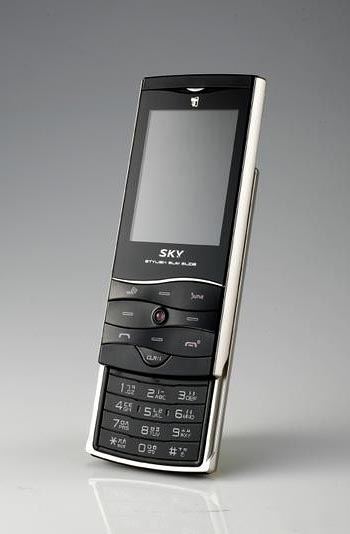 Who said that cell phone designs needed to be linear? The Sky IM-S300 depicted here is being marketed as the Romantic Wave Slimphone, largely because of the wavy navigation keys shoved beneath the large color display.

Most mobile phones that I’ve seen don’t really depart from the standard circle or rectangle, but what you get here is a free-flowing wave of keys that still put the controls in the places where you’d expect. If you look closely, there’s still a five-way navigator in there, for instance. The purple backlighting is supposed to look quite nice too.

In terms of features, the Sky Slimphone IM-S300 comes crashing in with a 1.3 megapixel camera, file viewer, e-dictionary, and a bevy of multitasking capabilities. To be available in Korea only, the Romantic Wave Slimphone will sell for about 450,000 KRW and will ship in black and white variants.