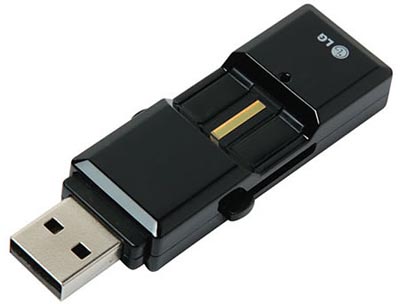 When USB flash drives first hit the market, people were amazed by the amount of storage you could shove into such a tiny package. Since then, manufacturers have been scrambling to include additional features in hopes of making their particular thumb drives superior over other offerings. They might include games, backup software, or any variety of other goodies to entice your dollar.

The LG Vaccine USB Flash Drive is not only designed to store your vital documents and photos, but while plugged into your computer, it’ll also keep you safe from malicious attacks. This is because the LG Vaccine comes equipped with its own antivirus and malware protection software, providing “real-time system monitoring and hardware scans.”

I assume that all of you have some form of antivirus software already installed on your systems, but the LG Vaccine could come in handy when you hit up a public terminal. This way, all the files stored on the drive can stay safe and private. If I’m not mistaken, there’s also a biometric fingerprint reader on there too. The LG Vaccine USB flash drive will be offered in capacities ranging from 512MB to 8GB.