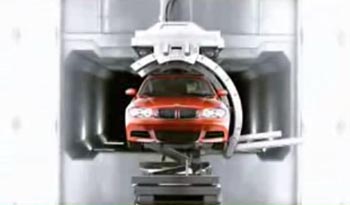 Creative advertising goes a long way in selling a product, regardless of whether said product is actually a winner or a loser. I need not remind you things like Chia Pets and Pet Rocks. Marketing works wonders. When it comes to the BMW 1-Series, I’m more interested in the ridiculous engine shoved under the hood, but other people may require more convincing.

BMW has just released one of the first BMW 1-Series commercials to be shown on American airwaves and let’s just say that it’s a little detached from reality. An average Joe consumer gets plunked into the middle of the assembly line as robotic arms swirl around him, forming the BMW 1-Series. He eventually gets blasted by lasers, gets gassed up, and then drives off into the while blue yonder.

Does this ad work for you? It’s creative, sure, but will it really “make you want to get behind the wheel”?