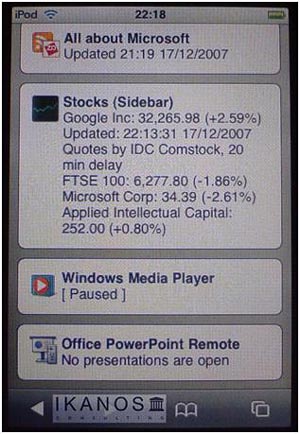 One of the cooler features on Windows Vista is a little something they call Sideshow. Instead of fully booting up your Vista-powered laptop, you can access core features with a mini boot. Through Sideshow, you can access your email, play music, and perform other minor tasks. People have performed various mods to bring Sideshow onto other devices, but this is the first time that I’ve heard about an attempt to bring Sideshow to the iPhone.

It’s definitely still in beta stage, but the developers are hoping to bring a small-screen version of Vista onto Apple’s glossy cell phone. In the future, they hope to extend this functionality to other devices, including the Nintendo DS, Wii, Sony PSP, PS3, and “much much more.” This is achieved through a web-renderer.

There are plenty of bugs to iron out, but when Vistasquad has a public beta ready for release, you can be sure to hear about it here on Mobile Magazine.