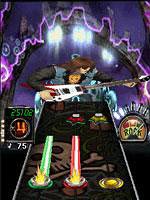 You may have heard about the Phase rhythm game that Harmonix made for the iPod. It was meant to give a near Guitar Hero-like experience for you while on the road, but it’s still not authentic. Now you can rock out for real, because Verizon Wireless has picked up the exclusive rights to Guitar Hero Mobile, bringing the musical experience onto the small screens of mobiles across the nation.

Naturally, the mobile version of the rhythm game isn’t quite as full or complete as its console counterparts, but it looks to be pretty darn good nonetheless. There are only three fret keys (like those found on Guitar Freaks by Bemani) instead of five, but you still get a rock meter, a multiplier, and Star Power.

There are 15 tracks taken from the console version of Guitar Hero III, including “Rock You Like a Hurricane” by the Scorpions and “Suck My Kiss” by Red Hot Chili Peppers. There are also four guitars and three venues.

Guitar Hero Mobile is available now via Verizon’s Get It Now service for $4.49 per month or $11.99 outright.