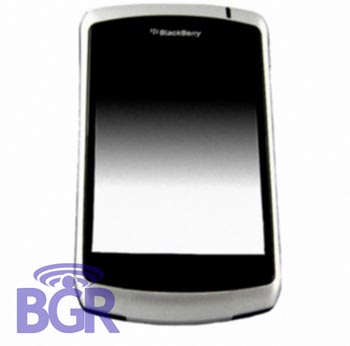 We’re still on the hunt for the perfect BlackBerry, but if you’re hoping that the rumored BlackBerry 9000 will fulfill all of your push email wet dreams, you may have another thing coming. The Boy Genius has come across a series of confirmed specs surrounding the BlackBerry 9000 from RIM. While some of these details are obviously attractive, there are also many letdowns.

For starters, don’t expect a BlackBerry 9000 series, at least not right off the bat. Instead, we are currently looking at a single device that will rock a 480×320 screen size and while this mockup doesn’t show it, the BB 9000 is said to be a full QWERTY phone. It might be a touchscreen-based QWERTY, though, like the iPhone.

In terms of the operating system, you should expect the BlackBerry OS 4.3.2, which will eventually filter throughout the 8000 series (except for the 8700 family). Other highlights include quad-band GSM/GPRS/EDGE and 802.11a/b/g WiFi, but there is no mention of either HSDPA or UMTS. The launch date is projected to be in Q1 2008.