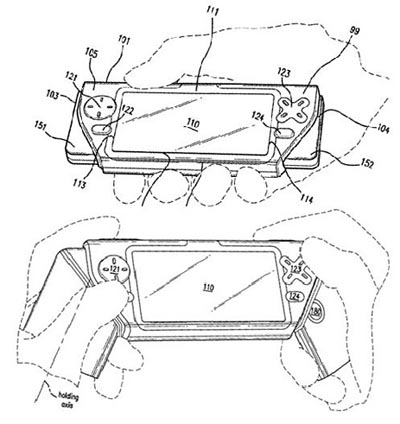 I’m sure many of you still remember the first Nokia N-Gage device. Some people have compared the original gaming phone to a plastic taco, and as such, it didn’t go over quite as well as Nokia has hoped. Well, you already know about Nokia revitalizing the N-Gage branding in software form (starting with the N81), but they’ve also got new hardware too!

In this patent drawing, we see what could be the next-generation Nokia N-Gage gaming device. It’ll naturally be a cell phone too, but it’s definitely got a mobile gaming slant to it. In fact, there are handles that swing out much like the hand grips found on the PlayStation controller or the ones found on the GameCube controller.

I’d say that the device looks alright as a handheld gaming machine, but how will it work as a cell phone? I think the N81 does a much better job in that respect.