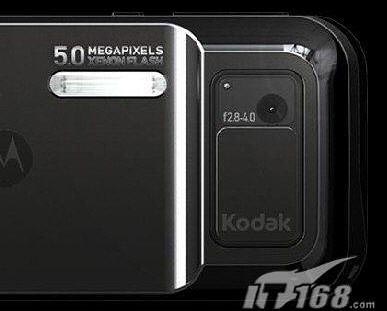 I’m definitely taking this unsubstantiated report with a huge bucket of salt, but I’m also not sure how I should go about digesting it. Here’s a sneak peek at the Motorola ZiNe Z12 cell phone and what is clearly featured most prominently is a 5 megapixel camera courtesy of the folks from Kodak.

I think it’s great that Motorola is stepping up the megapixel count on their camera phones, if this story by Chinese website IT168 is to be believed, but it’s a bit of a letdown that they partnered with Kodak. In case you didn’t realize, Kodak digital cameras typically hit up the lower end of the spectrum, with quality to match. If Motorola was looking to up the ante on their camera phones, why would they buddy up with a budget camera maker?

We also hear that the rumored Motorola ZiNe Z10 is going to be a slider, contrary to earlier reports that it will be a clamshell. There’s also word of WiFi and GPS navigation being included as part of the package, but we won’t know for certain until Moto hits the stage at CES or 3GSM next year.