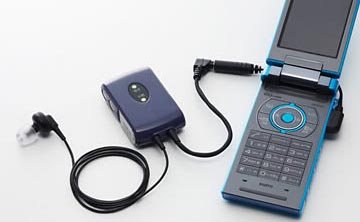 We’ve all been there. You’re stuck at a location that is terribly loud, making a cellular call virtually impossible to complete. You can’t hear what they are saying and there’s no chance that your voice is actually being picked up by the mic on your Bluetooth headset. With so much noise, a conversation just isn’t happening.

The Sanyo E-Ear handsfree kit may look a little retro, but it’s got some rather cutting edge technology. Instead of a traditional microphone, the E-Ear picks up the sound of the voice from inside your ear. You see, the noise-isolating ear bud that plugs into your ear canal serves dual purposes. It shoots the voice of the caller on the other end into your skull, while simultaneously picking up the vibration generated in your ear canal by your voice. Bone conduction makes it possible for you to have a crystal clear conversation in the noisiest of environments.

The unit itself is about the same size as a clamshell phone and then there’s the cord that leads to your ear. The price you pay for talk-anywhere convenience is a little up there, though, with the wired model going for $350 and the Bluetooth version retailing for $525. Both go on sale in Japan around April 2008.