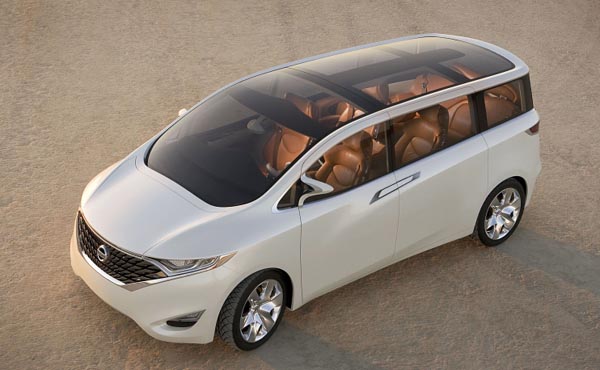 Some people may tell you that minivans are a thing of the past, but if something like the Nissan Forum Concept ever makes it to production, we might be seeing a resurgence of the family van. You see, the Forum isn’t being bandied around so much as a grocery getter as it is a mobile living room or lounge. The people mover comes with all sorts of features that’ll keep the kids entertained while providing parents with peace of mind.

For starters, the Nissan Forum comes with something called “turntable” seating wherein the first two rows of seats can be spun around, appropriately enough, like they were on turntables. While at a rest stop, everyone can face one another for some chit-chat or a game of cards. There’s also a built-in microwave oven for hot meals on the go.

Other features include a Kids Cam (for parents to monitor the rear cabin), a tinted glass roof, real wood accents, Around View Monitor (AVM) system, headliner-mounted cameras, and a “Time Out feature that simultaneously mutes audio playing through the Forum’s various entertainment systems and broadcasts the driver’s voice over the interior speakers.”

The Nissan Forum Concept is scheduled to appear at the Detroit Motor Show next month.