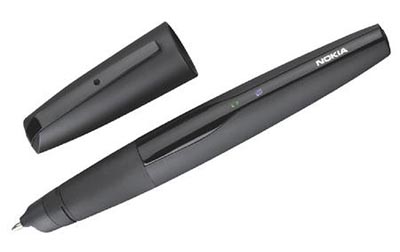 Nokia is already pretty well known for creating some world-class cell phones. They’ve got a good hold of the Symbian smartphone market and they’re more than prepared to tackle your photographic and mobile music needs. I guess they’re starting to get bored with just making different mobile phones and Bluetooth headsets, because Nokia has just revealed the Nokia SU-27W Digital Pen.

The idea with this digital pen is nearly identical to every other digital pen that you’ve seen before. You write notes with it as you normally would with a conventional pen, but it records every stroke you make, every i that you dot and every t that you cross. All this data is stored on the 1.3MB of internal memory, later getting transfered to your computer or phone. The transfer can take place either via USB or Bluetooth.

You won’t find any sort of display on the Nokia SU-27W Digital Pen. Instead, the only indicator is a single LED for battery life and, presumably, data access. The pen, which retails for 26,800 Yen, works with the Nokia N73 and the E61.