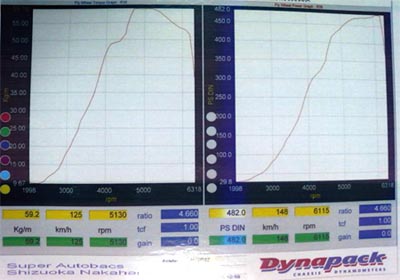 Normally there is quite a discrepancy between the claimed horsepower and the actual figures when you place the vehicle on a dyno. Incredibly, while Nissan is boasting that the GT-R has 480 horses under the hood, a real life dyno has the beast churning out 475hp. Only a five horsepower difference? That’s amazing.

The dyno was performed by Japan’s BestCar and they mounted the all-wheel-drive monster atop a Dynapack chassis dynamometer. Unlike other dynos, however, the guys decided to rip the wheels off of the Nissan GT-R, grabbing the figures straight from the axles. This creates more efficiency, but a mere 5hp difference is still very impressive.

Nissan has done a fantastic job with eliminating turbo lag, though very little happens before 3,000 rpm. Autoblog thinks this is because “the Dynapack at Super Autobacs wasn’t paying attention until later on in the rev range.”