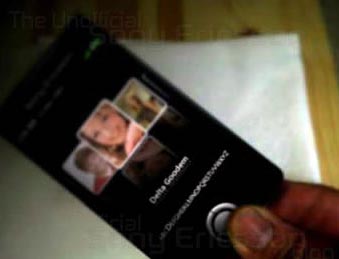 A beta tester of the Sony Ericsson P5i has reportedly leaked out a picture of the hotly anticipated handset, giving us just a glimpse at the Symbian 9.1-powered slider. While most of this is still conjecture at this point, we managed to rummage up a few rumored specs and details to tickle your fancy.

For starters, the Sony Ericsson P5i is a slider phone and it will be running on a version of Symbian 9.1, possibly getting the treatment from UIQ4, although UIQ 3.2 is more likely. Teh 2.8-inch display is said to be of full VGA resolution, making it perfect for mobile video watching and web surfing. The radios found inside include GPS, and 802.11b/g WiFi. We also hear that there’s a 5 megapixel CyberShot camera, 160MB internal memory, M2 and microSD expansion, and a 360 MHz processor.

Like I said, these are all rumored specs, but we hope to hear some sort of confirmation from Sony Ericsson at the Mobile World Congress in February. Stay tuned.