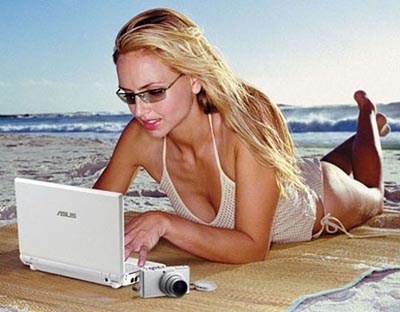 The regular 4GB Asus Eee PC is pretty hard to find in stores, because it’s got to be the hottest item this holiday season. Instead of churning out more inventory of the original Asus Eee PC 701 (4GB), Asus is stocking the shelves with a few alternative units: the Asus Eee PC 2G Surf and the Eee PC 8G.

As you can probably guess, the Asus Eee PC 2G Surf boasts half the on-board storage of its 4GB counterpart. It’s also got half the RAM, chiming in with 2GB of flash memory and a mere 256MB of RAM. And the RAM is soldered on, so it’s not upgradeable. This also means that the operating system has been dialed down too. In many ways, the 2G Surf is meant to compete against the OLPC XO laptop.

Instead of powering down, you may want to fork out an extra hundred bucks to get the Asus Eee PC 8G. It’s got a full 8GB of on-board memory, as well as a full gig of (upgradeable) RAM. This assuming, of course, that you can even find one available for purchase.