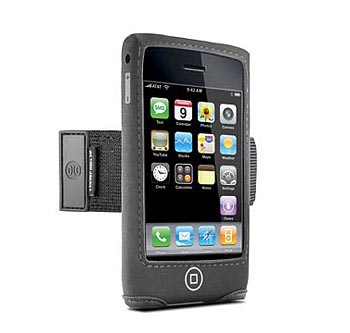 It’s been said that just having a set of white earbuds protruding from your skull is enough to get you mugged, so imagine how much of a target you’ll become with the DLO Action Jacket for the iPhone. It’s not a spectacular creation on its own, as the Action Jacket is little more than an armband accessory for Apple’s cell phone, but by having the $400 device dangling from your bicep, you’re just asking for trouble, aren’t you?

Maybe I’m just a little paranoid, because this armband is certainly functional. One of the biggest reasons why people snatched up an iPhone in the first place was because it was such an effective convergence device: you get an iPod, a mobile web surfer, and a cell phone, all wrapped up in one beautiful glossy package. Maybe you bought an iPhone instead of a cell phone and an MP3 player, and thus, the iPhone is your only form of mobile music.

And what if the Nike+iPod Sport Kit makes its way to the iPhone? Then you’ll definitely want one of these, right?