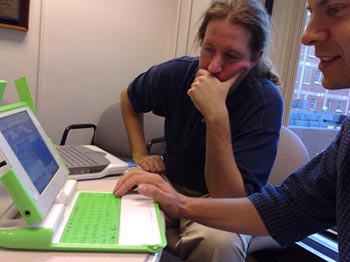 The whole point of the One Laptop Per Child (OLPC) project is to empower the children of the world and to help them learn better, especially if they happen to be living in less than stellar conditions. You would think that a product geared towards children would be as intuitive and simple as possible. Unfortunately, OLPC’s XO laptop is not newbie friendly at all.

As you recall, there was a promotion last month wherein you could buy two of the el cheapo computers, shipping one to needy children and shipping the second to a special child in your life. Well, one guy saw this on 60 Minutes and decided to take advantage of the deal. Unfortunately, upon receiving his OLPC, he couldn’t get the Internet running on the bloody thing and “is contemplating sending the second laptop to needy children too.”

Ouch. There doesn’t appear to be anything wrong with the hardware, but the Linux-based operating system is said to be less than intuitive. Counter this to the “easy to learn” build of Linux found on the Asus Eee PC.