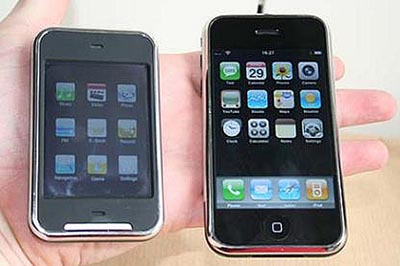 If you were to look at the Pasen iTouch by itself, presenting it someone who is not terribly familiar with the real thing, there’s a chance that they might mistake the player for the iPod touch. As soon as you turn it on, however, you’ll discover all sorts of shortcomings that the Pasen device has compared to a real Apple product.

As you can see in the side-by-side picture here, the screen resolution is decidedly lower. The screen is also physically smaller at 2.8-inches and the relative brightness is relatively poor. You’ll also notice in the video below that a stylus must be used to interact with the player. There’s also no accelerometer for auto screen rotation.

But it’s not all bad. The Pasen iTouch does come equipped with a full 4 gigabytes of internal memory, as well as a microSD expansion slot. Another minor bonus is the USB adapter that lets you charge the Pasen iTouch through a wall outlet. Not bad for a clone, but not great either.