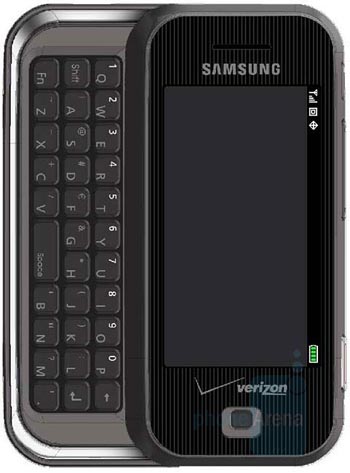 When you consider Windows Mobile PocketPC phones with slide-out QWERTY keyboards, it’s usually HTC that comes to mind. The Taiwan-based manufacturer has produced all sorts of handsets using this basic form factor, including the T-Mobile MDA, the TyTN, and the Mogul. But HTC does not have this market completely cornered.

The Samsung SCH-U940 is a beauty of a smartphone, complete with a 3.2-inch touchscreen and a sliding QWERTY keyboard. And now it’s bound to the United States, because the handset has received a stamp of approval from the guys at the Federal Communications Commission (FCC). By all indications, the Samsung U940 is joining the ranks of Verizon, right alongside the LG Venus and LG Voyager.

The reason why this phone looks so familiar is because it is the Americanized version of the Samsung F700 smartphone. It’s got EVDO, a 2 megapixel camera, 150MB memory, microSD expansion, and stereo Bluetooth.