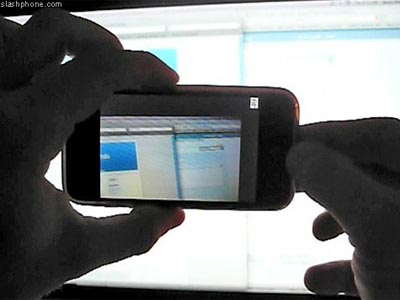 The iPhone is widely regarded as a fairly advanced piece of technology, but it was only after the “enthusiasts” got their hands on the device that we really started to see what it was capable of. After all, we had to wait for the jailbreak before installing third-party applications. Apple wasn’t the one that gave us an NES emulator; it was some random geek on the internet.

Taking still pictures with the iPhone is as easy as can be, but it was immediately frustrating to early adopters to realize that the handset could not do video, unlike so many other basic camera phones on the market. That has now changed. Drunknbass has developed an application for the iPhone that finally allows for video recording. Yes, video on an iPhone!

As you can see below, there is currently no user interface and no way of actually storing the videos you take. The sample includes a series of 10fps videos that are recorded and immediately played back. Monster and Friends are working on a more advanced application that can record at up to 45 frames per second and the final version — currently under development — will come with the ability to record unlimited size clips at up to 30fps… and there will be an interface so you can save the clips too.