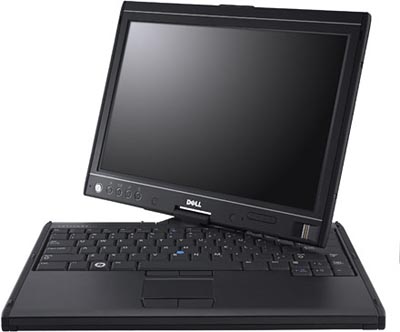 “Dude, get a Dell.” That statement can now extend into the world of tablet PCs with the official announcement of the Dell Latitude XT. The company has been toying with the idea of a Tablet PC since 2004, so it’s nice to finally see those inclinations come to fruition. In many respects, the Dell Latitude XT looks almost like a Lenovo ThinkPad, except it’s a Dell and, well, it’s a tablet PC.

The storage options are plentiful as well. In the 4200rpm hard drive range, you have the 40GB and 80GB, whereas the 5400rpm drive comes with 120 gigs of storage. Alternatively, you can ditch the spinning platter in favor of either a 32GB or 64GB solid state drive. Battery life has been rated at 5 hours and 9 hours for the standard and extended battery packs, respectively. Prices start at around $2500.