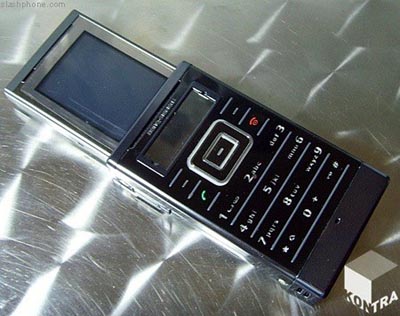 Slider phones seem to be all the rage these days, largely thanks to the efforts of Samsung and LG. Typically, slider phones feature a single large display and it’s when you slide them open that you reveal the numeric keypad. The BenQ-Siemens SL98 has a completely different take on the slider form factor and that’s why it’s being bandied around as a reverse slider.

While in its closed position, the SL98 looks almost like the phone side of a Samsung Upstage. There’s a tiny single-line display at the top and then a standard numeric keypad below. The larger display is actually housed near the rear and you slide it upwards to reveal it. As you can see in the picture provided, it certainly does look backwards compared to regular slider phones.

Outside of its unique design, the BenQ-Siemens SL98 doesn’t have a lot of special stuff to offer. It’s got a 1.3 megapixel camera, microSD expansion, Bluetooth, and a QVGA display. The phone showed up on eBay a short while ago, but the auction is now over. Keep your eyes peeled for another auction if you’re interested in getting a rather unique handset.