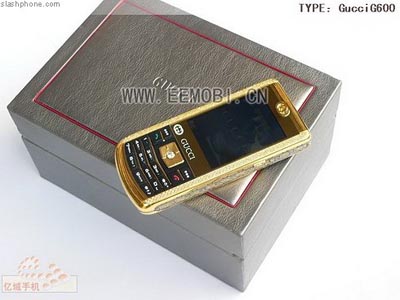 This is the kind of mobile phone for the posers in the audience. Not everyone can afford the ultra expensive limited edition handsets with encrusted diamonds and other jewels, after all. The Gucci G600 isn’t a Gucci phone at all, but that didn’t stop a random Chinese manufacturer from taking advantage of the expensive nameplate.

You think that you’re getting real 24K gold on this phone? Think again. It’s a knockoff in every sense of the word, complete with fake Gucci emblems, fake diamonds, and even a faux Gucci cell phone theme to round out the package. Just like a fake Rolex watch, however, I’d imagine that most people can spot this fake from a mile away.

In terms of “real” features, you get a 2.1-inch QVGA display, FM radio, 2 megapixel camera, and microSD expansion. There’s also a fake Gucci box with fake certificates “authenticating the fake gold and diamonds.” Oh, the audacity of it all!