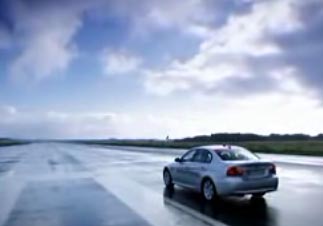 I’m not sure if this prototype is designed to address the inherent laziness of today’s drivers or if it’s simply an exercise in what is capable. I’m sure you’ve seen several science fiction shows and movies featuring cars that can drive themselves. In their most advanced renditions, you simply had to say the name of your destination and the flying car would take over. This BMW isn’t quite there, but it’s certainly getting pretty darn close.

It would be a bit of a misnomer to say that Jeremy Clarkson of Top Gear is taking the BMW 330i sedan out for a spin in this video, because the car is completely driving itself. Jeremy is not touching the pedals, the shifter, or even the steering wheel. You see, BMW has outfitted this prototype with military-grade GPS and some sort of computer that “learns” the track. Take for a single lap and the car remembers how to attack those turns at full race speed. Clarkson mentions that this same technology could easily be integrated into a BMW M3.

This has got to be one scary experience. Let’s just hope that the car doesn’t experience the automotive equivalent of the blue screen of death.