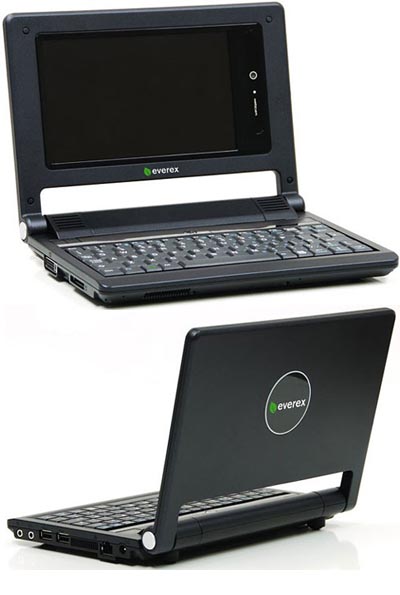 One of the hottest gifts this holiday season is the Asus Eee PC. They can’t even keep the shelves stocked with the little seven-inch wonder. If you’re anxious to do some mobile computing, you may want to consider the upcoming Everex Cloudbook, a Linux-powered UMPC that appears to be very similar to the Asus Eee PC.

As you may recall, Everex is the same company behind the gPC, a budget desktop computer that has been bandying around at Wal-Mart stores. Like its desktop counterpart, the Everex Cloudbook is also powered by Linux. Other criticals include a 7-inch screen, 1.3 megapixel camera, wired and wireless Ethernet, 4-in-1 card reader, USB 2.0, DVI-out, and 512MB RAM.

Comparing it to the Eee PC reveals several differences. Instead of a solid state drive and a 900MHz Intel Celeron processor, the Cloudbook gets a 30GB hard drive and a 1.2GHz Via C7 ULV processor. The price is expected to be about the same — $400 — when the Everex Cloudbook ships around January 15th. A developers version with touchscreen UI, Skype, and alarm clock module may “arrive as early as January 1st.”