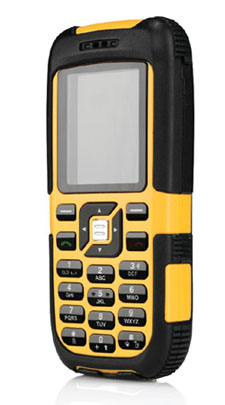 Here’s a claim that I would love to test – Sonim Technologies claims that their Sonim XP1 GSM is the world’s toughest phone. To prove their claims, Sonim took their phone on a trip through Europe on the ‘World’s Toughest Phone Tour’. This tour sounds like a wet dream for tech geeks – customers were able to do whatever they could to try to destroy the phone. Highlights including driving over it with a car and soaking it in a tub of beer (with all due respect to the phone, that’s a waste of beer). The phone obviously survived both tests. It has to be tough,, because Sonim offers a three year unconditional warranty.

The phone has Bluetooth and is Push-to-Talk enabled. It is designed to be impervious to water, wind, dust, or extreme temperatures, and to survive being dropped or abused in whatever way you might come up with to hurt it. It’s probably overkill for most people, but having one would make for a good story.