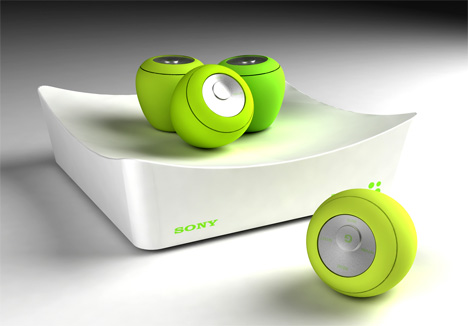 You’d think that if anyone were going to make a remote control in the shape of an Apple it would be, well, Apple. Not in this case, though. The idea with this design concept is that each member of the family would have their own Apple Remote. The remote is hand-sized, and has a very simple button structure on it. Each individual can program their Apple to best meet their TV watching needs. The little green machines are also motion sensitive in Wii style, so you could, for example, turn down the volume by rotating the remote to the left and vice versa.

The idea is that each family member’s remote would be a slightly different shade of green. That way they could be told apart when they are sitting on the coffee table in the specially designed bowl which not only houses them to be shown off in their fruity goodness, but also charges them for their next use.