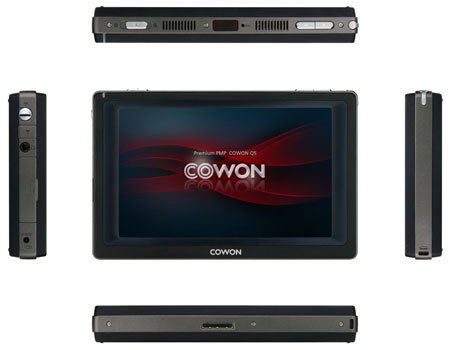 It took almost a year for the Cowon Q5W to come to the U.S. after it was unveiled at CES 2007 in January. An early review gives us a hint whether it was worth the longer than expected wait. The first impression of the reviewer was the size of the screen. We knew from the specs that it was going to be big – a 5″ WVGA. Hands on, though, it seems even bigger, with just a couple of buttons getting in the way of the screen taking over the whole face of the device. There are a couple of problems, though. First, the touchscreen actually requires a stylus for many of the screens, so it isn’t as easy to use as it could be. Also, perhaps because of the screen, at 380g it is heavier than pretty much every comparable device. The reviewer also indicated some surprise that Cowon chose to use Windows CE when newer and better offerings were available. There’s obviously much more to be said about the device, but it seems to boil down to this – the Cowon Q5W is a nice device, but far from a perfect one, and it probably won’t change the world.