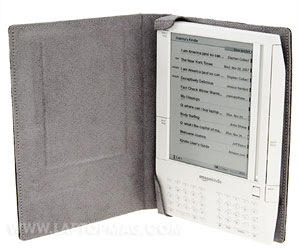 The Amazon Kindle is a product that has been a long time coming, yet won’t be universally embraced. It will be readily accepted by some users, but I don’t see how it will replace paper books any time soon. A recent review does nothing to change that opinion. You can’t pretend that style doesn’t matter in electronics, and style certainly isn’t something that the Kindle has going for it. It looks like something straight out a mid-80’s nightmare.

The first feature that is very modern and gets rave reviews, though, is the e-ink screen. It is reportedly very easy on the eyes and works fast enough to be usable. The full QWERTY keyboard is crucial for buying books via EV-DO, and is reportedly easy to use, though it was easy for the fingers to move faster than the keyboard could respond, causing a delay of a few seconds. The battery life is reportedly impressive as well – two days with the wireless on, and seven days without the wireless. The Kindle store was apparently pleasing to use, but web browsing and listening to music was less satisfying.