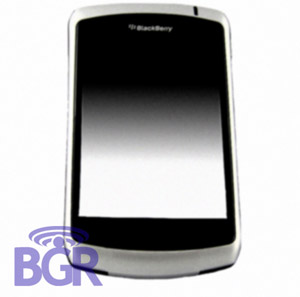 It appears that specs for the much anticipated Blackberry 9000 have leaked, at at first glance the new device might remind you of the iPhone. Like Apple’s pride and joy, the 9000 is dominated by a screen and lacks the traditional input methods that we are used to on other Blackberry models. It has a couple of things that could have it competing favorably with Apple. The processor seems to be a bit more powerful – a 624MHz Intel XScale PXA270 processor as compared to the iPhone’s 620MHz ARM 1173 processor. The 9000 will also be comparatively fast thanks to HSDPA, which is a first for a Blackberry. The screen in 480 x 320 resolution. There is a 3.2 megapixel camera, and 1GB of onboard memory. The device will also have Wi-Fi and GPS. Of course, none of these details are confirmed, so they are all subject to change. We don’t know when the 9000 will hit the streets, but a release in the first or second quarter of next year seems likely.