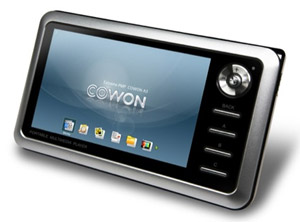 We’ve been hearing about the new Cowon A3 personal media player for quite a while now, but it hasn’t done those of us in North America much good because they haven’t been available here. That’s a shame, but its about to change. The word is that the device will finally hit American shores early in December. It comes in 30GB and 60GB models, and will cost $349 and $399 respectively. At those prices, it doesn’t make much sense to buy the lesser model, does it? If you are really looking for the best deal from Cowon, though, then you might want to skip both of these models and hold out for the Q5W, which has been just released and adds WiFi to a player otherwise resembling the A3. Either way, its about time the A3 crossed the ocean – it’s been around for over a year now. By the looks of it, though, it may be worth the wait.