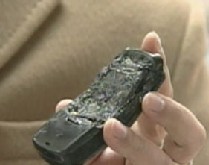 Here’s a story that sounds like a bit of an urban legend, but at least so far it appears to be true. A man in South Korea was apparently killed this week when his cellphone exploded. The LG phone was in his shirt pocket when it went boom, and the shrapnel pierced his heart and his lungs. It apparently also broke his spine and a couple of ribs. When he was found the phone with a melted battery was still in the pocket. That’s enough to scare you off of using your phone for a while, but there is a chance that something helped the phone explode. He was working on a construction site, and using an electronic shovel (whatever that is), so something could have happened to cause the phone to incinerate. Regardless, it’s certainly not the kind of advertisement that LG was looking for.