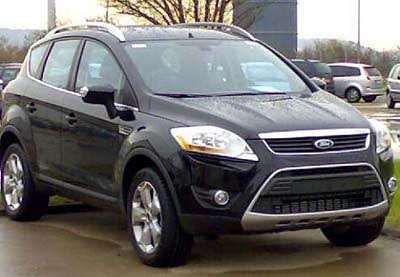 I’m not entirely sure why, but if it weren’t for the blue oval on the nose of this compact SUV, I would have sworn that the upcoming Ford Kuga was really a Hyundai in disguise. Perhaps its the angular lines wrapping around the rear wheel wells, maybe it’s the long sloping hood. I just keep thinking of the Tucson or the Santa Fe for some reason.

Whatever the case, very little has apparently change on the Ford Kuga between being revealed as a concept vehicle at the Frankfurt Motor Show in September and today when we caught glimpse of the production model. As far as we can tell, the Ford Kuga will be heading to European dealerships this coming Spring with a variety of engine choices. Among these powerplants is Ford’s new 2.0L turbodiesel.

There’s no word yet whether the Ford Kuga SUV will make its way over to North America in some form, but there is a distinct possibility that it will be reworked as the Mercury Mariner replacement, being placing further upscale than the current model. Some people are hoping that this will replace the current Escape, but I feel it’s too round for that market. Escapes have typically been more rigid and box-like.