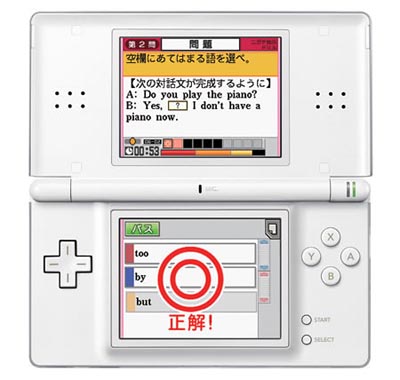 And we’re not talking about just one game either. Instead, a Japanese company has concocted no fewer than 18 Nintendo DS titles to help the kids of their country learn English from the ground up. The range of “games” are being largely targeted at elementary school children, letting the young’ns learn through their DS gaming machines rather than just listening to a talking head at the head of the classroom.

The audio-visual training is supposed to be incredibly intuitive to use — as is nearly everything on the Nintendo DS — and the software includes written challenges, as well as verbal tasks. I just hope that they know that blue isn’t pronounced “brew” like in Brain Age. After finishing a set of tests, the children are presented with their results in a “graphical format for easy interpretation.”

The 18 Nintendo DS titles are scheduled to drop in Japan early next year, but pre-orders will be taken as f December 3rd. Each subject costs $37, the “middle 1 alphanumerical country” costs between $107 and $143, and the combined plural pack software costs $232. Wow, these are some expensive games!