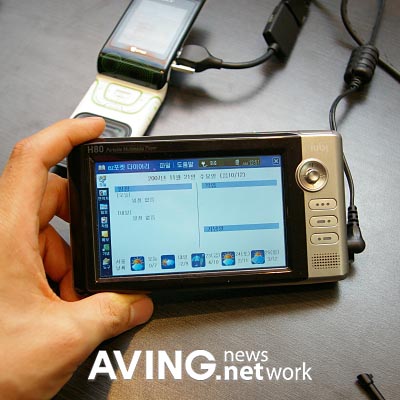 There are two competing trends in the world of electronics. On the one hand, you have proponents of minimalism, wanting devices that lack buttons every which way, seeking gadgets that do only one thing, but do it very well. On the other hand, you’ll have folks that want virtual Swiss Army knives. They want gadgets that’ll play music, organize their lives, and cook them dinner. The Iubi H80 PMP fits better in this latter category.

The specs are pretty slim, but I hear that the Iubi H80 is a Korea-only device with a form factor similar to the Archos portable media players. You get a large widescreen display (four-inches or so) with navigational buttons located along the right side. Looking at the menu, there are a series of tabs on the left for accessing various functions like weather and entertainment.

Other features include support for Bluetooth 2.0 and WPAN (wireless personal area network). Look for the H80 PMP from Iubi to drop later this month.