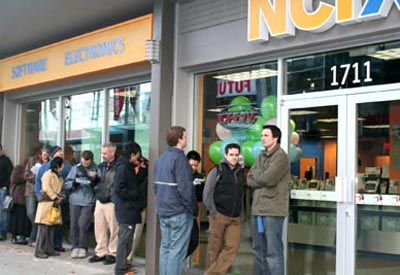 I’ll give you some clues. It’s only got a seven-inch screen, four gigabytes of internal memory, and it runs on Linux. If you guessed the Asus Eee PC, you guessed right. Despite have specs that are considerably lower than most mainstream laptops, the Eee PC has really won over a huge audience thanks to its great build quality, solid state memory, and a $399 price point that is highly attractive.

Rated as the “most wanted Christmas gift among notebooks products” according to Amazon and CNET, the Asus Eee PC could quite possibly be more sought after than Guitar Hero III or the Nintendo Wii. Nearly every retailer who carries the Eee PC has been sold out of the tiny laptop for some time and even when they do get stock, the units are snatched up before they hit shelves. Take NCIX, shown here, for example.

There have been over ten thousand Asus Eee PCs sold in the product’s first two weeks in the marketplace. A similar trend is being experienced in other regions of the world as well, including Taiwan and Hong Kong.