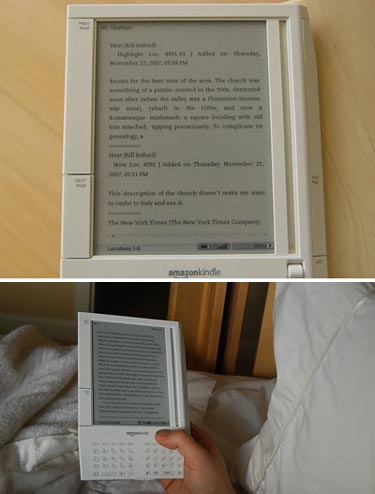 Where do you like to read your books? For most people, this could be cuddling up with a novel just before you go to sleep or it might be finding a shady spot under a tree. Whatever the case, the most likely real life scenario would not involve you sitting at a computer desk with a laptop opened beside you. It was with that concept in mind that this real life review of the Amazon Kindle was written, judging its utility in the bedroom, on an airplane, and “atop the porcelain throne.”

Among the observations that Gizmodo made include praise for choosing Sprint’s EVDO service rather than WiFi. This is because EVDO is more widely available than WiFi, effectively letting customers buy new e-books pretty well anywhere they go. The lack of a backlight makes reading easier on the eyes and battery life could be extended to about the four day range (with EVDO turned on).

Unfortunately, EVDO is available everywhere and there are regions where service is spotty at best. When trying to download the current issue of The Atlantic Monthly, Wilson Rothman of Gizmodo said it took five minutes. We’re a society of instant gratification, so this just won’t do. In the end, he does conclude that “a connected e-book reader was what the world needed, and as long as Amazon’s library expands to encompass every book I want to read.”