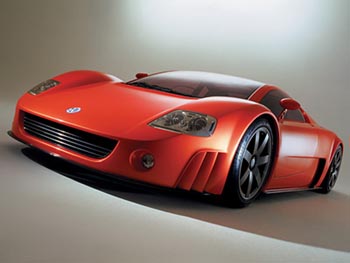 Volkswagen is no stranger to the supercar game. Before the Audi R8 hit the streets, the world caught a glimpse of something called the Volkswagen Nardo. And that something was insanely fast.

While I’m not a huge fan of the name Nardo — they might as well call it the Nad-Doh! — the actual car itself looks a piece of engineering genius. The VW Nardo was unveiled to the world in 2007 at the Tokyo Motor Show, but it never made it to production for whatever reason. Maybe it got a little camera shy and they didn’t think that it would fare particularly well in the marketplace, seeing how it couldn’t possibly sell for cheap.

Powering the beast is a monstrous 6.0L W12 engine, developing about 600hp and propelling the car from a standstill to 60mph in just 3.5 seconds. Considering that its curb weight was a mere 1,200 kilograms, the Nardo boasted one impressive horsepower-to-weight ratio, easily achieving its top speed of 217mph. Peep the vid for a better look.

On a side note, is it just me or does the Nardo look like a hybrid between a Lamborghini Gallardo and an Acura NSX?